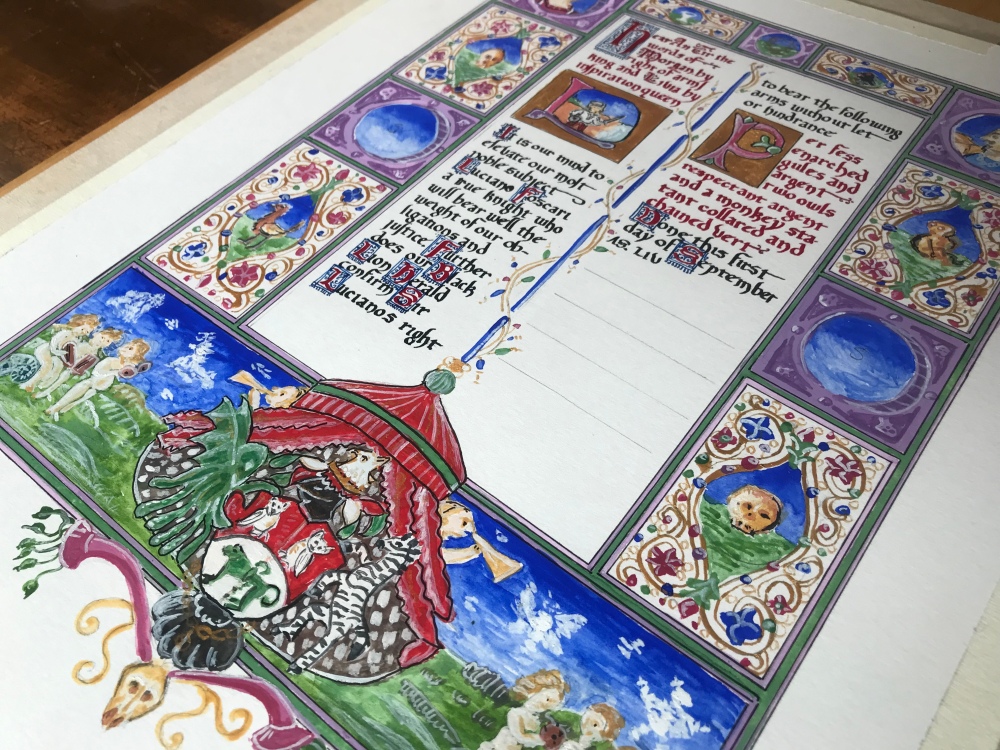 A scroll for Luciano’s knighting.

9″x 12″. Gouache and ink on Bristol board. Collaboration with Tekla Myszkowa.

Some things are a stretch. This scroll surely was. We had almost exactly two weeks to make this happen, offer to concept to finished scroll and knighting. But, Collaboration makes it happen, to borrow from Sesame Street.

Our requests from Luciano and his wife Tessina were: Italian, not at all like his other scrolls, heraldry included, death, cherubs, and monsters.

Tekla and I sat down with books and the internet to work out a concept and an order of work.

Knowing that his existing scrolls were based on documents or otherwise calligraphy focused, a book illumination based design seemed right. We settled on a 15th century manuscript from Milan that already had cherubs, skulls and heraldry, as well as places to put seals, and determined that she would lay out the design and do the calligraphy, and I would paint.

Since we were using Luciano’s heraldry we sought Black Lion’s approval so we could also include that seal and signature. This was even easier than usual since I’m Black Lion currently. Spoiler: I love heraldic scrolls and I love signing them.

Tekla laid it out.

Tekla and I wrote a text for TRM approval, including the full blazon of Luciano’s arms, which I double double checked in the O&A. 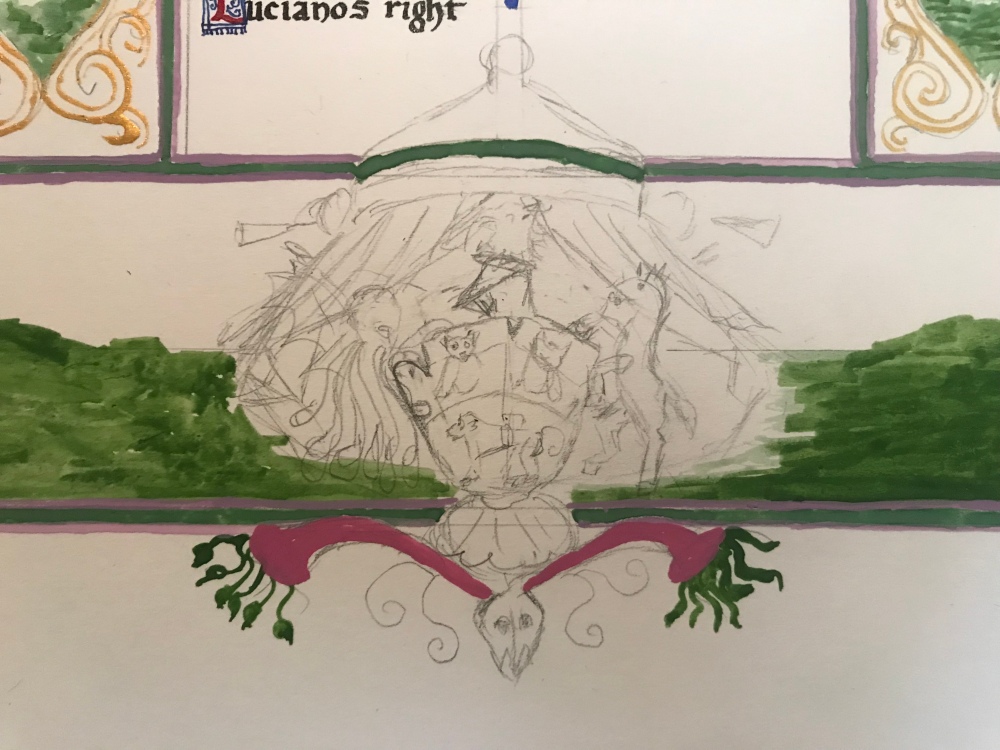 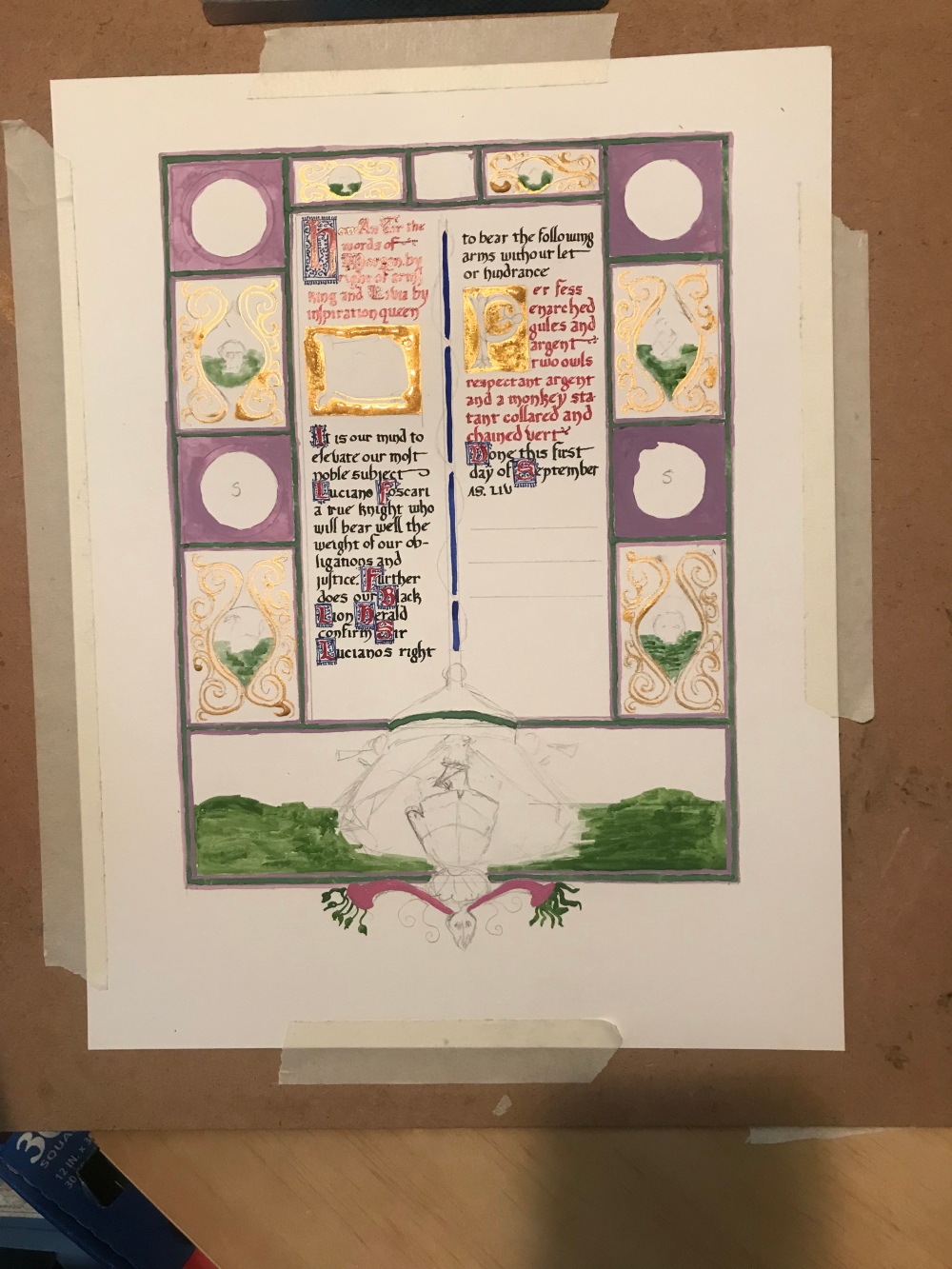 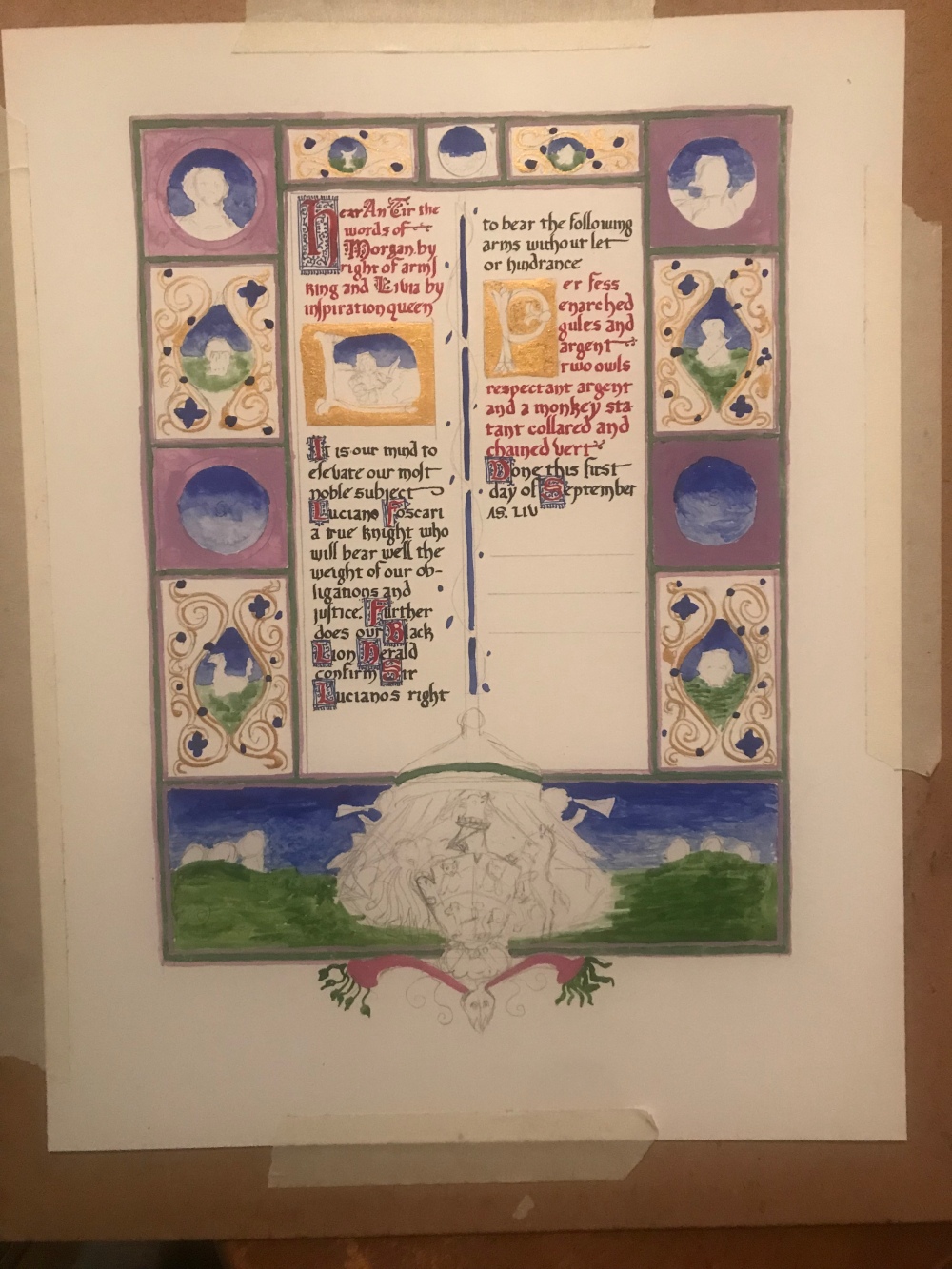 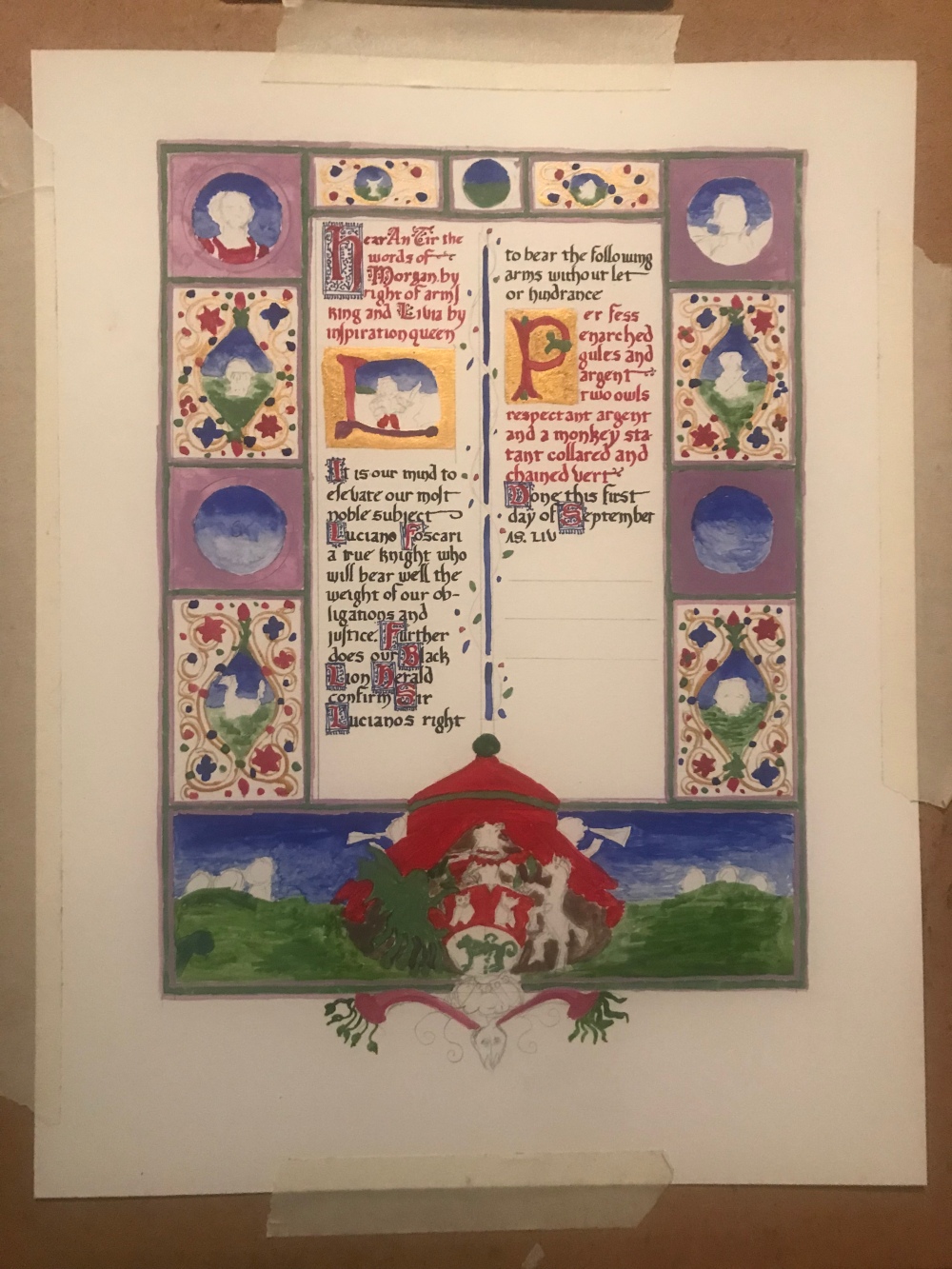 The clouds were my favorite part. The original has somewhat fantastical clouds, so here is where we worked in the monsters, including King Kong, Godzilla, Mothra and the Stay-Puft Marshmallow man.

The heraldic achievement contains his arms, his preferred supporters, a viscounty Coronet on cap of maintenance, and the chain of the order of chivalry with the badge of the Order of Defence. 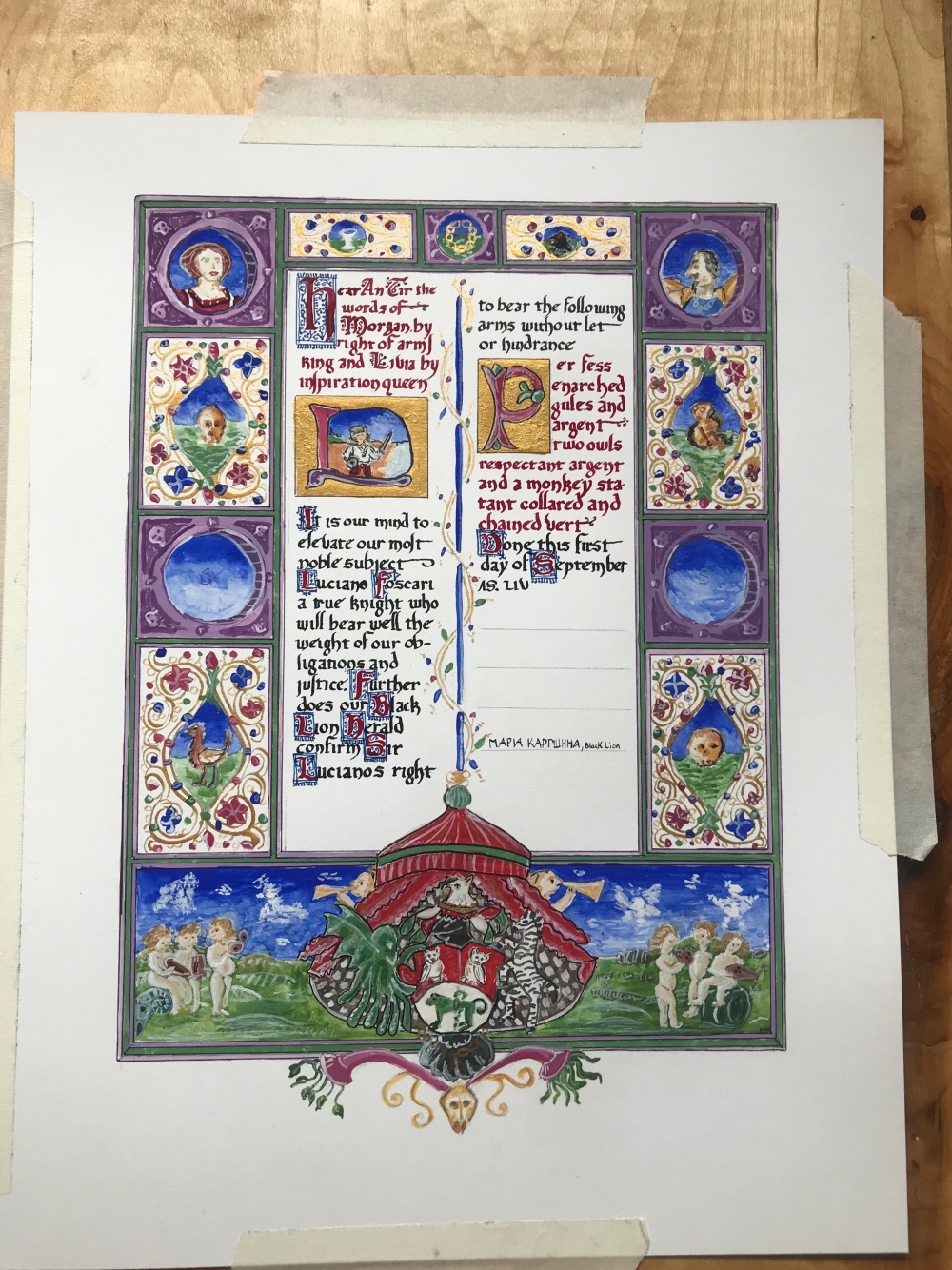 Signed by me as Black Lion Herald and ready for seals and TRM signatures. We both did forget to sign the back.